Communitas ALC (Agile Learning Center) is a 501(c)(3) nonprofit committed to providing local homeschooling youth with opportunities to pursue what we call “Self-Directed Recreation (SDR)” through our weekly drop-off SDR Program. Communitas ALC is part of the Agile Learning Center (ALC) network (https://agilelearningcenters.org), a network of centers working to provide youth with more opportunities for autonomy and self-direction.

We also host a Book Club that occurs the first and third Thursday of every month at 7:00pm. More details for the book club can be found at the bottom of this page.

Recreation is a beautiful word. A simple definition is “Activity done for enjoyment when one is not working” (Oxford Languages dictionary). Looking more deeply, it’s rooted in the Latin word recreatio, which means “that which refreshes, restores, or recreates”. It’s also quite similar in root and meaning to regenerative, another beautiful word being used in different contexts (e.g., regenerative agriculture). We define a regenerative activity as one that leads to continuous upward cycles of growth and heightened well-being – this is very much in line with the idea of recreation as that which “refreshes, restores, or recreates.” Thus we think of recreation as a regenerative activity critical for continued growth and well-being. Put simply, we think of recreation as a regenerative and intrinsically motivated activity done for enjoyment, curiosity, and/or growth. Importantly, it’s an activity that isn’t forced upon a child (when it’s forced, it becomes more like work).

We put the self-direction back in recreation. Recreation is inherently a self-directed pursuit driven by choice and personal enjoyment, yet recreation has lost this self-directed sense for many youth. It has become sports leagues and after-school activities that are highly structured. Even if a child has chosen to participate in the activity, room for autonomy and choice during the actual activity is limited. That’s not self-directed recreation.

Our Self-Directed Recreation program is dedicated to providing youth of all ages the materials (e.g., art, music, electronics, sports, etc.), space, and social support they need to pursue self-directed recreation. We believe youth will naturally grow, learn, and thrive through self-directed, intrinsically motivated, recreation. In the process, youth get to explore their interests, learn about themselves, connect with a supportive mixed-age community, and connect with the natural world. We want youth to become the fullest version of themselves, not who society says they should be. We want youth to feel comfortable and supported to show up everyday as themselves in our space, without feeling the pressure of harmful societal expectations. As Ralph Waldo Emerson put it, “To be yourself in a world that is constantly trying to make you something else is the greatest accomplishment.”

When was the last time your child(ren) felt like they were a part of a mixed age community in which they were free to show up as themselves, to pursue their interests alongside other youth and adult mentors, and to just have fun together?

We see our work as social justice work. Social justice isn’t just a value we give a nod to – it is at the heart of all that we do in our programs. Self-directed recreation (SDR) is intentionally anti-oppressive and respectful of youth’s rights to autonomy and happiness. Oppression. It’s a heavy word that can be uncomfortable to hear. When one group has more power than another and forces their will upon the other, that’s oppression. Despite the good intentions of educators in conventional school, it’s an inherently coercive institution that forces youth to do things against their will. Again, we believe that most educators have youth’s best interests at heart, but that doesn’t change the fact that the conventional education system is designed to force youth to do certain things, at certain times, in certain ways, regardless of whether the youth want to or feel ready for it. We bring anti-oppression to life by intentionally not forcing kids to do things against their will and by empowering them to direct their own growth and self-discovery processes through self-directed recreation. We believe giving youth this experience of freedom and self-determination is a critical step towards a more socially just future. “If we can accept any form of oppression, we are susceptible to all forms of oppression” (Akilah S. Richards).

We also strive to make this liberatory approach accessible to all who are seeking it out, particularly those affected by systemic inequity in our society. The social and political forces that shape our lives concentrate resources, wealth, and opportunities into the hands of a few, to the detriment of the many. This is one reason that homeschooling support programs have historically been inaccessible to underprivileged families. To address this, we commit to doing all we can to make our SDR program both financially accessible (tuition on a sliding scale with scholarships available) and logistically accessible (e.g., working with families to make transportation arrangements, if needed).

“If we can accept any form of oppression, we are susceptible to all forms of oppression” (Akilah S. Richards)

We also differ from some other centers in our focus on intergenerational community-building and nature connection. We believe that people thrive when in intergenerational spaces, where kids, adults, and elders are playing/working alongside one another, learning with and from each other. Nature connection is also a common thread across our community. As a community, we pay attention to the seasons and strive to act in harmony with the natural world. Community members are never forced to engage with nature more than they wish to, but they’ll be surrounded by people of different ages who are striving to kindle their own connection with nature. For more on our views of intergenerational community-building and nature connection, take a look at our Vision page.

How do we actually do self-directed education? We use the tools and general framework developed by the Agile Learning Centers (ALC) network. If you’re asking yourself “What will my kids actually be doing? How will they learn?” you can start with the description of “What a day looks like” on our fall program page. You can also see our Resources page or the great explanation given here at the ALC network website.

In the video below, we try to help people understand how self-directed learning can work, and is even natural, even for “difficult” academic skills. 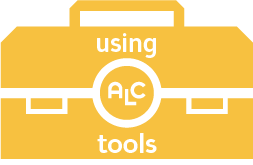 It takes a village...

“It takes a village to raise a child.” In many ways, this saying gets at the heart of what makes our community so important for youth and so different from their typical daily experience, either as homeschoolers or in conventional school. But we also think typical interpretations of this saying miss the point. Listen to better understand the community experience Communitas ALC works to provide for youth (and adults), and why we instead say: it takes an intentional learning community for youth (and adults) to thrive.

Our vision for the future  is very large in scope, but the first step for getting there is simple: Work together to tend a co-op (cooperative) garden that both gives back to the community tending it while also building healthy soil. We are drawing from permaculture and regenerative agriculture to start a regenerative co-op garden. This garden will be cooperatively tended by unschooling/homeschooling families with kids of all ages during “school hours” and traditionally-schooled kids and adults at other times. The food grown there will feed the families of those who tend it, thus tightening the loop between our daily activities, the food that sustains us, and the natural world. This garden is not an official Communitas activity – it’s a first step in providing a space for self-directed learners of all ages to come together and start building a community. In the meantime, we’ll continue exploring options for long-term location options. Despite the garden not being an official Communitas activity, we do want it to operate in line with our overall Communitas mission.

The co-op garden will serve as a focal point around which learning and other community-building activities naturally emerge. One goal of Communitas is to provide self-directed learning opportunities to people of all ages. What does this mean? Anyone who wants to learn regenerative agriculture techniques can do so through participation in the garden. These approaches are new to many of us, which means that we’ll all learn together by doing. This means that there won’t be formal “classes,” we’ll just be sharing knowledge and learning as we go.

In line with the main idea behind self-directed learning (one of our core values) is also the idea of autonomy and choice, particularly for young people. We won’t force anyone to learn or participate if they don’t intrinsically want to. Families with young kids are encouraged to join us and while the adults work in the garden, the kids can participate as much or little as they’d like. There will be plenty of room for kids to explore and play together outside when they don’t want to be experimenting in the garden.

While the garden is the central activity of our community, other activities and groups will inevitably emerge. We envision mixed-age groups of people gathering nearby to explore shared interests, whether they relate to nature (e.g., gardening, animal tracking, herbalism) or other topics (e.g., music, art). This means people will be chatting, doing crafts, making music, or doing something else together. The form these groups take will not be forced into being by us – instead, they’ll be given the space to organically emerge through our interactions with one another.

We want to live in a more equitable, sustainable, and compassionate world. We believe the quickest way to make this a reality is if we lead the way on a local level. Our vision for this future is driven by the core values and pursuits pictured in this image. Click below to learn more about each of these. 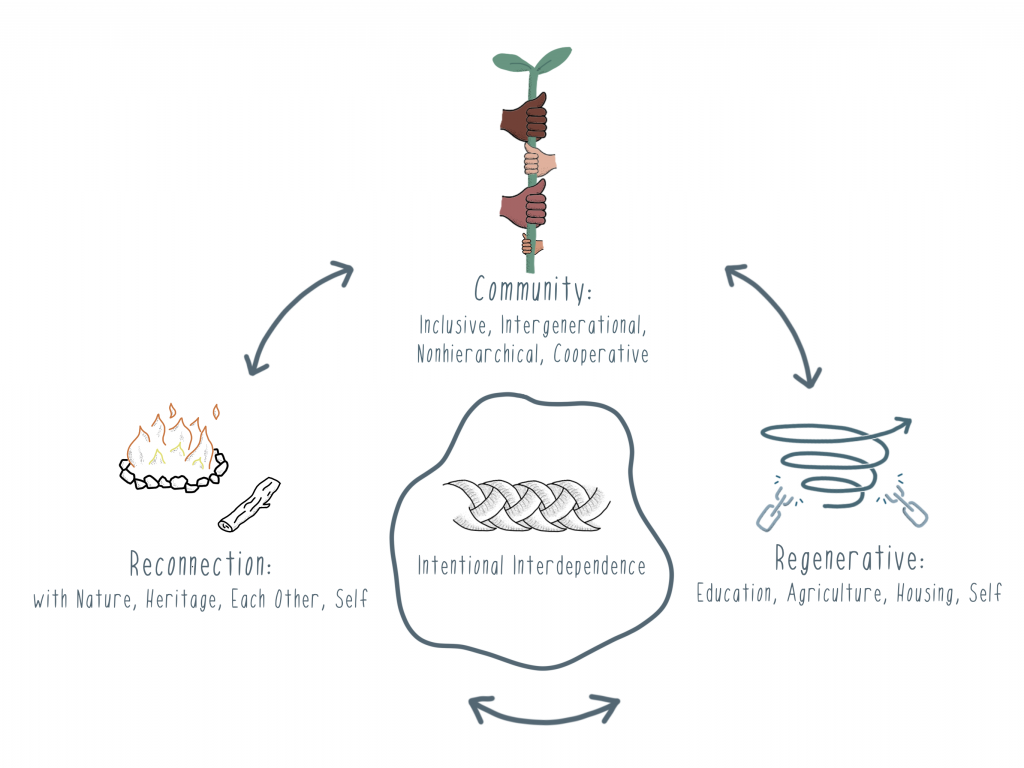 For program details, check out our program page using the link below.

Matt is also leading a book club focused on self-directed recreation and self-directed education. It meets virtually the first and third Thursday of every month at 7:00pm. Our first three books were Free to Learn by Peter Gray, Raising Free People by Akilah S Richards, and Helping The Butterfly Hatch (Book Two): How Can We Support Young People in Self-Directed Education? by Je’anna Clements. Email to learn what we’re currently reading. It’s a relaxed discussion with others who are also exploring what SDR/SDE are, how/why to do it, and how to de-school ourselves as parents in the process. It’s a great group for people wanting to learn more about SDR/SDE or who simply want to be a part of a supportive group of like-minded people.

For more information or if you’re interested in joining, please email Matt at matt@thisiscommunitas.org.

If you’re in the Tompkins County area and interested in getting involved or learning more, please join our mailing list (at the bottom of the page) to receive updates on local Communitas developments and activities.